How to Give an Acceptance Speech – Jim Young Marriott

I’m an active member of the Montgomery County Chamber of Commerce here in Maryland, right outside the Washington, DC area. Every year a new Chairman of the Board is sworn in at the Annual Awards Dinner in June. And every year I look forward to the words of wisdom and inspirational messages to all of the members and supporters from the local and state levels. Jim Young Marriott acceptance speech was excellent in every regard.

Jim Young Marriott Vice President, was sworn in as the 57th Chairman of the Board. He was eloquent and a pleasure to listen to. I specifically asked him for his speech and in fact, he gave me his copy. I wanted to share his narrative as it is rich with figures of speech, pausing (look for the …), vocal variety (look for the … and short phrases), and insightful words that you can’t help be moved by. He has a clear Better Tomorrow Message TM of “Answer the Call of Duty.” This is an excellent example of how to deliver an acceptance speech.

After Jim’s speech narrative text below, I point out several figures of speech and areas of vocal variety.

It is my honor to accept and assume responsibility for leadership in the Chamber. I follow in the footsteps of my friend Jerry Shapiro and 56 other predecessors who have led this strong organization.

I dare say that I may be the FIRST Chairman of the Board to have parachuted from airplanes and helicopters in service of his country. And it is through that experience … with similar danger and risk … that I accept this honor.

A “sense of duty” is a moral obligation and call to action most closely associated with those who wear a uniform – public safety, law enforcement, and the military service. It’s not a requirement.

Second Lieutenant Audie Murphy understood the meaning of duty. I’d like to read from the citation that awarded him the Medal of Honor in World War II:

As he commanded Company B, they were attacked by six tanks and waves of infantry. Murphy ordered his men to withdraw into the woods while he stayed forward at his command post… and continued direct artillery fire, killing much of the advancing enemy infantry.

Behind him one of his tank destroyers received a direct hit and began to burn, and with no regard to his own safety. Murphy climbed atop the tank destroyer, which was in danger of blowing up at any moment… and opened fire against the enemy.

As he stood on top of the tank destroyer… alone, exposed to the dangers of enemy fire from 3 sides, he courageously

killed dozens of Nazis with his deadly force. Murphy continued to hold his position and for over an hour he fought the enemy, causing their infantry attack to eventually waver and fall back.

Despite a leg wound, he continued his fight until his ammunition was exhausted. He made his way back to his company and refusing… medical attention… organized a counterattack that eventually forced the Germans to withdraw.

His indomitable courage… and refusal to give an inch of ground… saved his company from possible encirclement and destruction, and enabled it to hold the woods which had been the enemy’s object.

Why would Audie Murphy do such a thing? Why would he take such an enormous risk? When asked, he answered simply, “It was my duty.”

Now… imagine the same level of commitment – A CALL TO DUTY – to defend and ensure the future of your home and way of life. Every day, as business leaders, entrepreneurs, educators, civil servants, we put our careers and reputations on the line in face of overwhelming odds.

We’re propelled by a sense of duty and place… here in Montgomery County.

This place… cultivates a powerful and innovative knowledge economy, including life sciences, information technology, and communications and satellites, as well as emerging industries such as cyber security and clean energy technology.

This place… offers an active outdoor lifestyle with 416 parks totaling nearly 36,500 acres of green space and sustainable practices to ensure these resources are protected.

This place… offers security through our 5 public safety agencies and first-responders.

This place… has the highest graduation rates among the nation’s 50 largest high school districts and offers world-class college and post-graduate degrees.

This place… offers a vibrant and diverse cultural scene, with more than 350 cultural organizations, 60 galleries, 22 theaters and 50 historic venues.

What makes this place so great? Did it happen by accident? Is it because of geography? Or… is it possible that generations of residents and citizens heard… and responded… to a call of duty? People who had been given much and, felt that from them, much was expected? People who were fearless in the face of adversity, brave when they faced overwhelming odds?

By virtue of the very fact that you are here tonight verifies that you know the answer.

May I preach to the choir?

You are the drivers,

You are the leaders,

You are the givers,

You are the shapers,

You drive business and industry… you teach our children and young adults… you push the known limits of science and technology day by day… you lift and enable our arts and culture to soar.

As the new Chairman of the Board, I ask you to join me as we work together, on our own “tour of duty” to make this place great for future generations.

I assure you it will be thrilling and rewarding… as jumping out of a perfectly good airplane.

Jim Young Marriott uses very effectively a variety of story elements, body language, and vocal variety to draw the audience in. Here are a few examples.

Improve Your Storytelling and Public Speaking

Interested in improving your storytelling and public speaking skills. We offer a variety of coaching services (individuals and groups) and workshops, both in-person and via webinar. 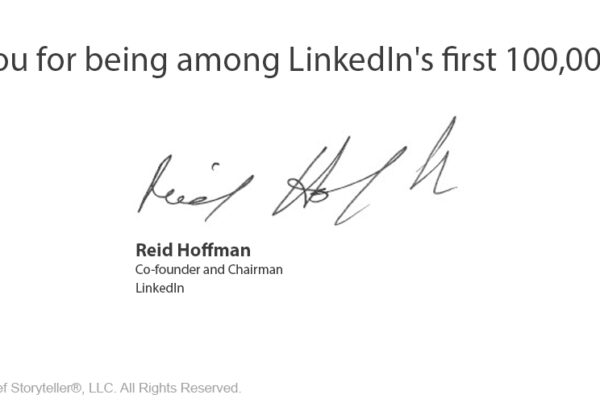 Ira, Thank You for Being Among LinkedIn’s First 100,000 Members! 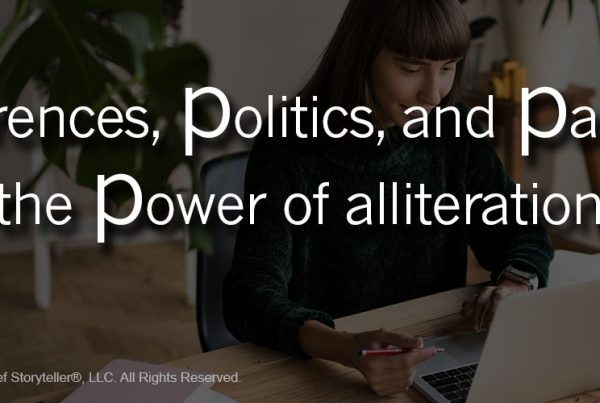 Increase the Impact of Your Words with Alliteration